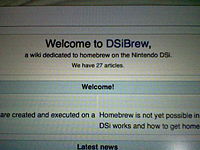 A picture taken with the DSi's camera.

The cameras are controlled and initialized with I2C Bus on ARM7 side.

The actual data transfers are done on ARM9 side with below registers.

Used for resetting cameras. Once cameras are reset by poking this register, all three 0x0400420X camera registers are set to zero.

For retrieving camera video data, NDMA with arm9 startup mode 11(camera) is used with this src register. The NDMA frame transfer is started when the cameras IRQ was thrown. Supported internal-cameras DSP final resolutions are 256x192 and 640x480, the corresponding frame transfer lengths are 0x18000 and 0x96000. (The 256x192 final resolution is converted by the internal-cameras DSP from the camera resolution)

The video data can be transferred as the camera's native YUV422 for higher quality or automatically converted to the same RGB555 as the 2D engine bitmap format. No official program uses the YUV mode, but it has been used in the homebrew dsi-camera.