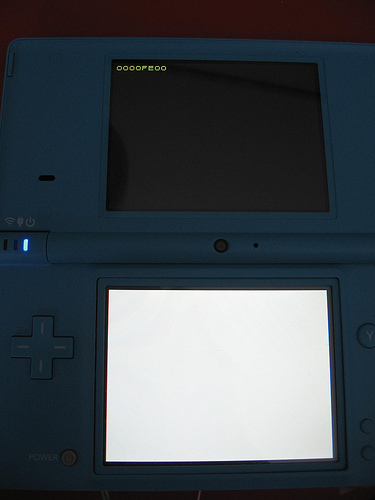 The first stage of the DSi's bootloader lives in ROM, presumably on the CPU die. It loads further encrypted (and probably signed) stages from NAND flash, starting with a (partially unencrypted) offset table in the sector at 0x200.

Not much concrete information is known about the second-stage bootloader. This may be an actual bootloader, or it's possible that this stage is the DSi Menu itself. The Stage 2 loader was not modified by the System Menu 1.4 update. This is still earlier in the boot process than the "Health and Safety" warning.

The first stage bootloader reads sector 0x200 in order to find a table of offsets to the Stage 2 bootloader:

It is unclear why there are two pieces which are nearly but not quite the same size. Passive traces of the boot sequence confirm that the 0x26e00 chunk is slightly larger, and it's loaded first. The 0x800 chunk is read immediately after the 0x26e00 chunk.